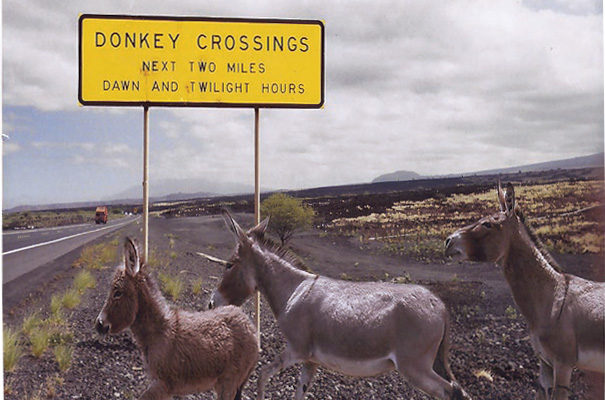 These Donkeys Own an Important Piece of Big Island History

The donkeys proved to be invaluable for the coffee farmers for more than 100 years, packing loads of coffee cherries from the rugged mountainside fields down to the drying and roasting facilities around Kona.

Of all the iconic animals we associate with Hawai`i — humpback whales, pueo, even the beloved gecko — the donkey most likely doesn’t make the top 10. And while they don’t walk comically upside down on our ceilings, majestically circle the skies, or leap playfully from the ocean, donkeys were integral to the success of Hawai`i Island’s coffee industry in its early days, and hold an important place in the state’s agricultural history.

Still spotted occasionally in the lava fields near Waikoloa Beach Resort and Waikoloa Village, the Waikoloa Nightingales — as they are called for the semi-melodious braying noise they make day and night, distinct from the typical honking of a donkey — are descendants of those working animals that helped coffee farmers get their product to market almost 200 years ago.

BEAST OF BURDEN
“Donkeys first came to Oah`u as pack animals in 1825,” tells Dr. Brady Bergin, a Waimea-based veterinarian who has spearheaded efforts with the Hawai`i Humane Society in recent years to care for and find adoptive homes for the Waikoloa herd. “A few ended up on the Big Island, working the higher elevation coffee farms on the slopes of Hualālai. They’re surefooted and hearty animals, and they can pack more per pound than horses.”

The donkeys proved to be invaluable for the coffee farmers for more than 100 years, packing loads of coffee cherries from the rugged mountainside fields down to the drying and roasting facilities around Kona, and from there to the coast where the beans would be shipped to market.

After delivering their payload, the donkeys would be loaded with salt, fish, and other supplies, and the Nightingales would dutifully head back uphill to the farm, sometimes making the round trip by themselves so familiar were they with the trails and task at hand.

After World War II, with more roads in place and a surplus of Army jeeps available, the donkeys were slowly phased out. According to a chapter on the Waikoloa Nightingales in Dr. Bergin’s book, “The Hawaiian Horse” (with Dr. Billy Bergin), “Over the years, many of these working donkeys were released into the wilderness to fend for themselves, which they were more than capable of doing in the lush tropical environment (near Kona).”

How did the donkeys end up nearly 45 miles away in the Waikoloa area? 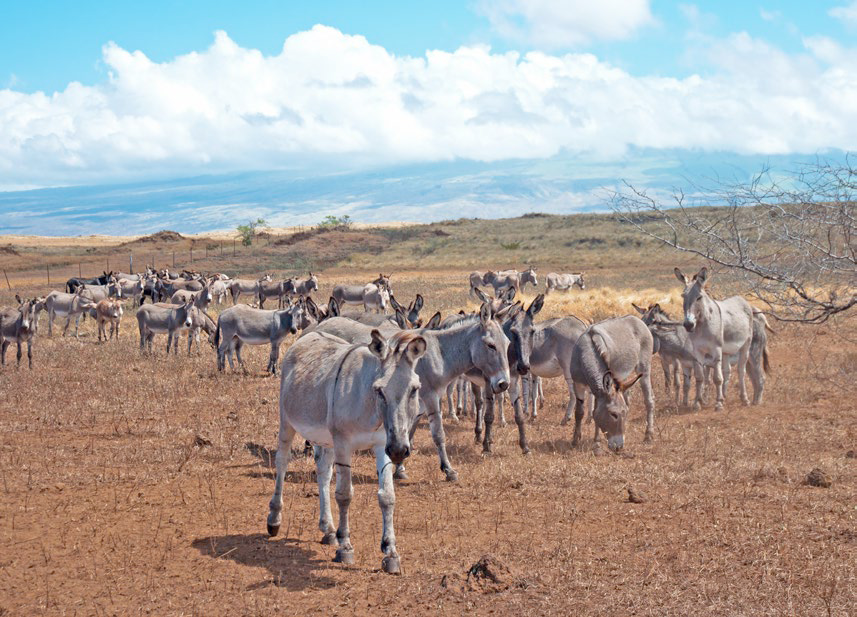 In 1974, Bergin tells, 30 donkeys were purchased from Hu‘ehu‘e Ranch by the Waikoloa Development Company for the purpose of developing a sort of Western ambiance for this newly established community.

“This new environment suited the donkeys very well. The dry, rocky terrain scattered with kiawe trees and copious amounts of fountain grass provided the most ideal conditions and their most natural habitat.

The population steadily grew, and their grazing migration expanded over thousands of acres, well beyond the Waikoloa Village Association land and into neighboring ranches such as Parker Ranch. Without proper management, it wasn’t long before the population was deemed out of control.”

As resort development along the Kohala Coast expanded in these years, and with the opening of Queen Ka`ahamanu Highway, the donkeys were cut off from their traditional watering holes near the coast. New homes and golf courses were being built too, and the by-now 600 or so free-ranging donkeys came to be regarded as more and more of a nuisance.

PRESERVING AN ICON
Attempts were made over the years to round up the wandering donkeys and relocate them to an area mauka of Waikoloa Village, where fencing could keep them mostly contained. But after a major fire swept through the area in 2006 and drought conditions became severe, the donkeys would break through fences looking for water and food, often wandering into Waikoloa Village proper. Traffic issues and resident complaints multiplied.

In early 2009, one concerned Waikoloa resident, Anika Glass, formed a group called Mālama Waikoloa Nightingales to support humane management of Waikoloa donkey herds. Glass was also instrumental in bringing the Humane Society of the United States on board to help find a solution.

“(Glass) was also instrumental in securing the support of my practice, ‘Āina Hou Animal Hospital,” Dr. Bergin writes. “I was able to donate time, services, and energy to help resolve the donkey overpopulation issues.”

By the summer of 2009, in the midst of historic drought, the feral donkey population reached a tipping point. “A rancher named Stan Boteilho was leasing the land (mauka of Waikoloa Village) at the time,” Dr. Bergin says, “and he approached me about what to do with the 600 or so donkeys that were roaming the land.”

Dr. Bergin toured the area on ATV with Boteilho and saw firsthand the problems facing the herd, including many that were weak from dehydration and some that were seriously injured. “The impact of what I witnessed struck me to the very core of my animal husbandry upbringing,” he writes. “I knew that I could not simply walk away.”

In November 2010, the Waikoloa Donkey Rescue and Re-homing project officially got off the ground. Boteilho put out food and water and humanely trapped the donkeys, then delivered 70 head to Dr. Bergin at ‘Āina Hou Animal Hospital within a two-day period. Dr. Bergin neutered the jacks and prepared the donkeys for adoption. This was the beginning of what would become the largest capture and re-homing of donkeys in Hawai`i.

Many were adopted out to local farmers and ranchers — Hōkūkano Ranch in Kealakekua, for example, took a large number of donkeys to return them to the area they were from originally — and some went to rescue groups in California. Two are at the Honolulu Zoo.

Additional adoption efforts were made in 2016, and nowadays, Bergin says there are fewer than 100 still on Boteilho’s land. “The long-term goal,” says Bergin, “is to keep 25 or so in a controlled herd on Stan’s land to preserve this historic and unique aspect of Hawai`i Island.”