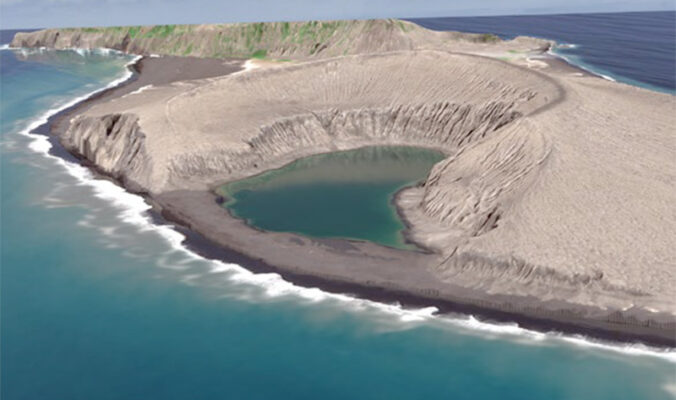 As reported on NASA’s Earth Observatory website, on Sept. 10, 2022, an underwater volcano in the Home Reef seamount in the Central Tonga Islands began to erupt. It “repeatedly oozed lava, ejected plumes of steam and ash, and discolored the surrounding water. Eleven hours after the eruption began, a new island rose above the water surface. By Sept. 20, the island had grown to cover 24,000 square meters (6 acres).”

Somewhat rare and always astound- ing, “Islands created by submarine volcanoes are often short-lived, though they occasionally persist for years,” Earth Observatory reported. “Home Reef has had four recorded periods of eruptions, including events in 1852 and 1857. Small islands temporarily formed after both events, and eruptions in 1984 and 2006 produced ephemeral islands with cliffs that were 50 to 70 meters high. An island created by a 12-day eruption from nearby Late`iki Volcano in 2020 washed away after two months, while an earlier island created in 1995 by the same volcano remained for 25 years.” 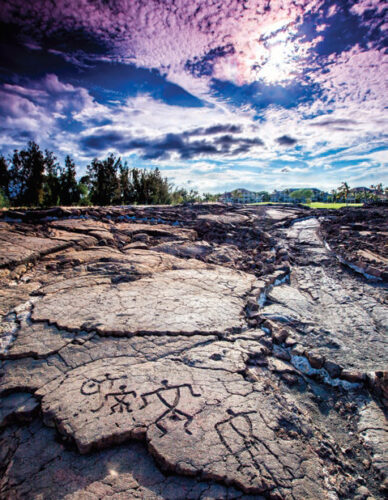 The Hawaiian Islands were formed in much the same way as described above, though they clearly have lasted many hundreds of thousands of years. And in fact, in another 100,000 to 200,000 years (give or take) the newest Hawaiian Island, Kama`ehuakanaloa (formerly Lō`ihi Seamount), will emerge from the Pacific Ocean. It is currently 3,200 feet below the surface, located around 22 miles off the southeast coast of Hawai`i Island, building slowly from an underwater flank of Mauna Loa.

It is not difficult to imagine what the land- scape of Kama`ehuakanaloa will look like when it emerges, as the vast fields of brown and black lava one sees on the west side of Hawai`i Island today provide the preview. Stretching from mauka to makai all along the Kona-Kohala Coast, the lava is a stark and magnificent sight that not even those who have traveled far and wide are likely to have seen before.

Born of the molten issue from Hawai`i Island’s family of five volcanoes — Mauna Kea, Mauna Loa, Hualālai, Kīlauea, and the Kohala Range — the dozen or so distinct lava fields we drive through to reach Waikoloa Beach Resort from the airport (which itself is built atop a lava flow from Hualālai) are anywhere from hundreds to tens of thou- sands of years old. The most recent eruption that flowed to this area came from Mauna Loa in 1859 and includes the land on which Waikoloa Beach Resort was built.

On the south end of the island, 100 miles from the Kohala Coast resorts, Kīlauea Volcano has been spewing lava almost continuously for more than 35 years, sit- ting atop the underwater “hot spot” in the 3,600-mile-long Hawaiian Island-Emperor Seamount chain.

According to the U.S. Geological Survey, “All the Hawaiian Islands owe their existence to this hot spot in the Earth’s mantle that has changed location only slightly over the past 70 million years. Countless eruptions of lava fed by the hot spot built volcanoes that eventually grew above sea level to form (the Hawaiian) islands.

“But because the seafloor on which they were built was continually moving north- westward across the hot spot at a rate of 7-9 centimeters per year, eventually each volcano was torn away from the hot spot and carried northwestward, just as a conveyor belt moves material from one location to another. Such is the (eventual) fate for the active volcanoes on the Big Island, though they will be replaced by new volcanoes.” 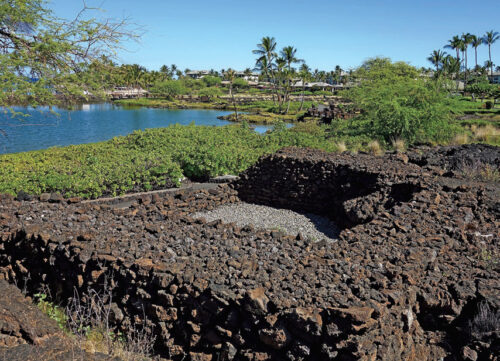 A LANGUAGE ALL THEIR OWN

Volcanoes have their own language and here in Hawai`i, even their own goddess. Visitors are sure to hear stories of Pele, the fire goddess of volcanoes; discover the difference between ‘a‘ā (sharp, brown) and pāhoehoe (smooth, black) lava; drive past cinder cones and pu`u formations; and view spatter ramparts, lava tubes and caves, and crustal overturnings by the side of the highway. Why so much variation in the look and texture of our lava fields?

“All Hawaiian lava is black when it first cools but may turn more brownish as the iron in the lava oxidizes with rain and time,” says James Kauahikaua, a geophysicist with the USGS Hawaiian Volcano Observatory.

The early Hawaiians made creative use of the dominant material they had on hand, using the lava rock to build boundary fences, pens for livestock, heiau (religious platforms), and fishpond seawalls among many things.

Adjacent to the fishponds fronting the Waikoloa Beach Marriott Resort & Spa, two rock structures — thought to have been constructed in the 1300s — were used for the highly structured, religious system of the Hawaiians. The men’s eating house, or Ka Hale Mua, is the larger of the two structures, and consists of three rooms. Men visited to worship the gods and eat food together. Women were forbidden to eat with men in ancient Hawaiian times. The sleeping house, or Noa, is a one-room structure where men and women met freely and slept together.

In some areas, the pāhoehoe lava was used for carving petroglyphs, with some of the state’s best petroglyph fields preserved within Waikoloa Beach Resort. With no written Hawaiian language, it is speculated that these rock carvings may be a sort of historical record of families, commemorations of significant events, or even astronomical symbols.