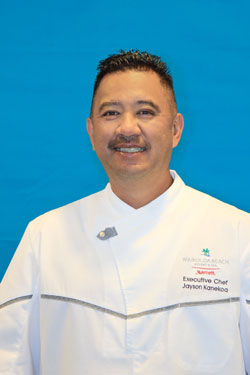 Kanekoa will oversee the resort’s culinary team, all food and beverage outlets, and will bring his expertise to cultivate the resort’s restaurant and catering menus. He attributes his passion for fresh, locally influenced cuisine to his upbringing in Kukuihaele on the Big Island of Hawai‘i. He attended the culinary program at Kapiolani Community College on O‘ahu before honing his culinary talents at the 555-room Waikoloa Beach Marriott Resort & Spa. Kanekoa climbed the ranks to his position today from his entry as a cook’s helper in 1986, to becoming a supervisor, to being named Executive Sous Chef in 2000.

Kanekoa is credited for his innovative creativity and for pioneering the resort’s renowned Chef Shuttle program. Chef Shuttle is the ultimate farm-to-table experience in which Kanekoa personally accompanies guests to the local farmers’ markets and farms in his hometown of Kamuela. He concludes the daylong excursion with an unforgettable, customized multi-course dinner under the stars, prepared with the fresh produce selected throughout the day. He is also committed to local agriculture by working with island purveyors. He collaborates with JA Farms to produce an exclusive organic green salad blend, to an orchard in Kona for authentic Kona coffee beans, to his team on-property for a hydroponic herb garden that allows “seed-to-table” harvesting. All produce is featured exclusively at the Waikoloa Beach Marriott & Spa’s Hawai‘i Calls restaurant menu. In addition, Kanekoa has garnered significant recognition and prestigious awards, such as two-time Aloha Week Festival Poke Competition Grand Champion, Sam Choy’s Poke Contest Grand Champion and a nomination for the J. Willard Marriott Award of Excellence. He is also highly invested in local charitable efforts, including the Hawai‘i United Way and American Cancer Society.

Kanekoa was raised on Hawaii island and currently resides in Waimea.

Search
Recent Posts
Back To Top