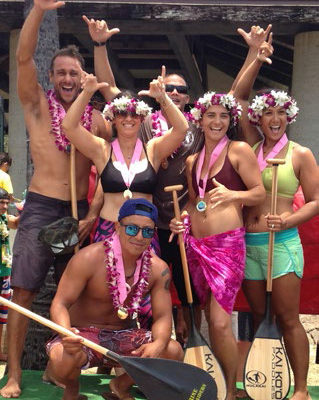 Some wa‘a are still built in this traditional fashion, but the greater majority of outrigger canoes these days are made of fiberglass and used by racing teams as well as recreational paddlers, such as at Waikoloa Canoe Club. Based on the beach at Anaeho‘omalu Bay in front of the Waikoloa Beach Marriott Resort & Spa, and adjacent to Lava Lava Beach Club, Waikoloa Canoe Club has some 300-plus members.

This past summer, the club’s racing teams had two big successes. In July, “I am pleased (and proud) to say that the Waikoloa Canoe Club paddling team won the Moku o Hawai`i Canoe Racing Association Division B Championship at Hilo Bay,” head coach Ed Teixeira said.

Then in August, the club’s Mixed Novice B crew — comprised of three men and three women who had never competitively raced in a six-person Hawaiian canoe previously — enjoyed an undefeated run in the HCRA State Championship at Ke‘ehi Lagoon, Honolulu.

How did the club do it? Teixeira says, “The club’s success was due to the quality and dedication of its paddlers and coaches. We have some very experienced members who train hard and set a very high bar. They expect the less experienced paddlers to work just as hard.”

And for his part, Teixeira imparts the cultural significance of the Hawaiian canoe, but in very real-world ways. “Last year,” he says, “our club theme was malama, (to take care of), which emphasized the importance of taking care of our canoes and each other. This year, by simply rearranging the syllables,” Teixeira says, “the theme is mamala, (to fragment, splinter), which suggests the application of sufficient power in a paddler’s stroke to cause a paddle to break.”

Teixeira also finds opportunities during and after practices to remind paddlers of Hawai`i’s cultural heritage as it applies to paddling. After one of the crews spotted a tiger shark that swam under their canoe during an evening practice, Teixeira said that members of the crew weren’t frightened by the shark (mano) but marveled at its grace, speed, and power. “And that seemed like the perfect encapsulation of the skills a racing team should embody.”