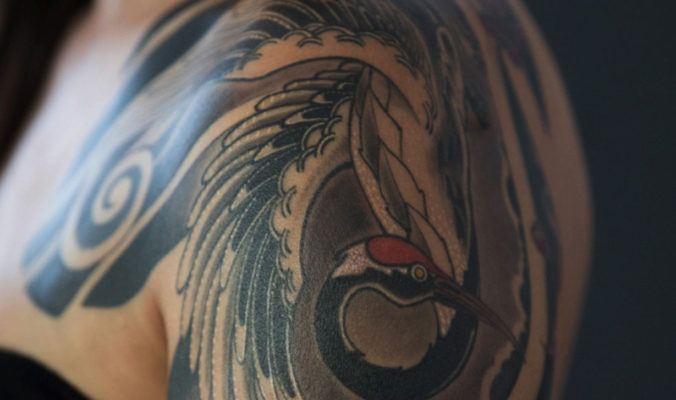 An Ancient Art Form with Purpose and Relevance Today

It is estimated that roughly 47 percent of Americans bear at least one tattoo somewhere on their body, ranging from small, often hidden symbolic insignias (such as butterflies and angels) to remembrances of life’s milestones (such as the birth of a child or the loss of a loved one). In some religions, such as Orthodox Judaism, tattoos are expressly forbidden. In other cultures, including throughout Polynesia, they are deeply rooted, often signifying one’s connection to their past and the very foundations of life.

According to P.F. “Ski” Kwiatkowski, whose book “The Hawaiian Tattoo” is one of the more comprehensive works on the subject, “Authentic Hawaiian tattoos tell stories deeper than the eye can see. Decorating the body by tattooing is an ancient practice in many areas of the world. In some parts of Polynesia that art developed to its highest degree.

“The very word ‘tattoo’ is of Tahitian origin — tatau — and it means to mark the skin with color,” Kwiatkowski continues in the foreword to his book. The Hawaiians carried on the tradition that was brought through many migrations.

Kwiatkowski goes on to describe how “the first European sailors to explore Polynesia were astounded and intrigued by the tattooed natives they encountered, and many of those sailors were themselves tattooed while in the islands. They took home the practice of tattooing and ever since, sailors have been synonymous with tattoos.”

In fact, much of what we know about ancient Hawaiian tattooing can be attributed to the drawings and writings of these European sailors. Specifically, the sketches done by John Webber of the Cook expedition, Louis Choris of the Kotzebue expedition, and Jacques Arago of the Freycinet expedition, detailed the body art of the islanders they encountered.

There were many tattoo designs throughout traditional Polynesia, some of which are still used in body art today in Hawai`i. Perhaps the most common designs are geometric patterns, including triangles, repetitive straight lines, circles, and squares. A design is repeated up and down the exterior of the leg or arm, or wrap the appendage in a circle. The chest, shoulders, and neck were often tattooed, and occasionally the face.

The triangle was especially important, according to Roland Pacheco, a Hawai`i Island-based tattoo artist who has also written and lectured extensively on the subject. “In Polynesia, the foundations of life were: kapu (what was forbidden), mana (the spirit), and akua (the gods).”

Thus, the three-sided tattoo reinforced your spiritual nature, your place in the culture, and represented the act of bringing your ancestors into the present. “You are representative of your ancestors,” Pacheco says. “The tattoo was more than a design, it encompassed your whole spirit, your family history, and your connection to the gods. You are literally giving blood and replacing it with ink.”

Other more recent (the last 200 years) designs include aumakua — family guardian spirits — and fanciful decorations memorializing pride, grief, or significant personal occurrence. Like so many other traditional Hawaiian cultural customs, Kwiatkowski writes, “Upon the arrival of the American missionaries in the 1820s, the practice of tattooing was frowned upon.” Other factors, such as King Kamehameha’s drive to unite and modernize the islands, helped to disavow the “old ways.”

Luckily, recent decades have seen a revival of Hawaiian tattooing traditions, with new practitioners overlaying their own interpretations and creative flair. In addition to those with Hawaiian roots wishing to show cultural connection, visitors to the islands are regular customers, wishing to take home a lasting memory of their visit. “When you look at any sort of tattoo, you’re looking at an artist’s interpretation of something,” Pacheco says. “As an artist, I do traditional tattoos, and also more modern interpretations. I ask first why someone wants the tattoo. I let them know the culture from which the design occurred no longer exists, but that it’s ok to admire and respect that culture.”

Often, Pacheco says, visitors to the islands “want a tattoo to protect them, to commemorate what they’ve been through in their lives, and to move forward.”

In other words, for many of the same reasons people have been getting tattoos forever.