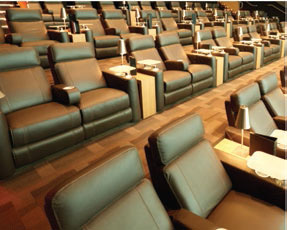 The Waikoloa Luxury Cinemas will be the first business the Dalzells have opened in Hawai`i, although they have been visiting the Waikoloa area annually for past 20 years. “It’s become like a second home and we’ve long thought of retiring here,” Tony Dalzell says. “When an opportunity came up to sell our businesses on the mainland, the ability to make the move became a reality.
“However, we both felt that we still needed something to do. As we actively researched potential business opportunities, the idea of a first-run movie theater came to us, as we’ve long known that there’s not much to do after dark on the Kohala Coast. Knowing nothing about the business, we did quite a bit of research on what was behind the standouts in the industry and discovered that all the pieces appeared to be here: a robust tourist market combined with a lack of competition in an entertainment venue.

“During our last couple of visits, we were shown ‘The Studio,’ a large, ultra-high ceiling space next to the Food Court with an adjoining covered lanai … it was perfect!” Just don’t ask the Dalzells if they plan to offer first-run films in the Cinemas.

“Of course!” Tony says. “It’s funny, everybody asks that question … like somehow it’s preordained that a drive to Kona or Hilo will always be required to see the ‘good stuff.’ That will be no longer!”