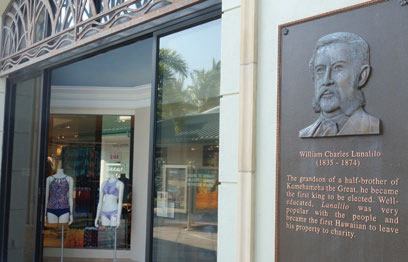 Hawai`i is the only state in the U.S. with a royal tradition. For centuries after the islands were settled, the people were ruled by ali`i, whose reach encompassed their home districts and often the entire island. A code of laws called kapu was strictly adhered to. It was not until 1810, when King Kamehameha I (Kamehameha the Great), who was born on the island of Hawai`i, brought all the islands together under a united ruler.
His rule, and that of his successors, shaped much of the Hawaiian culture that we know today, and that royal lineage is embraced and celebrated at Waikoloa Beach Resort in many ways.

A gathering place for many generations of Hawaiians, the first inhabitants of the area called Waikoloa are thought to have arrived and settled near ‘Anaeho‘omalu Bay as early as the late AD800s or early AD900s. By the middle of the 19th century, ‘Anaeho‘omalu had come to be regarded as part of the royal inheritance passed down from King Kamehameha I to his descendants, and the lands and fishponds were largely reserved for use by the royal family.

In that context, today’s place names at Waikoloa Beach Resort, such as “Kings’ Shops,” “Queens’ MarketPlace,” and “Kings’ Golf Course,” are more than just casual uses of the royal reference, but are historically accurate indicators of the heritage of the land.

Waikoloa Beach Resort has memorialized Hawai`i’s beloved royalty with a series of descriptive bronze plaques that visitors can find in various locations around Kings’ Shops and Queens’ MarketPlace.

Born in Kohala in 1758, Kamehameha the Great united all the major islands under one rule in 1810. Not only did he distinguish himself as a fierce warrior, he was known as a wise and compassionate leader of his people.

Born into royal lineage, Ka`ahumanu married Kamehameha I as a young girl and grew to became his favorite wife. Through her influence, she persuaded King Kamehameha II to break the `ai kapu (law) by eating with her in public.

Liholiho ascended the throne at a time of great change in the islands due to foreign influences. It was during his reign that the kapu system of laws was abolished, the missionaries arrived bringing Christianity, education, and the printing press, and whaling and the sandalwood trade fully took hold.

The daughter of Kamehameha I, also known as Tamehamalu, Victoria married Liholiho Kamehameha II. The couple contracted measles after paying a state visit to King George IV in London and consequently died. They had no children.

Kauikeaouli was a strong leader who contributed many reforms during his 30-year reign, the longest of any of Hawai`i’s rulers. His mild manner, good judgement, and solid character made him greatly respected by his people.

Betrothed to her cousin King Kamehameha V, she chose instead to marry Charles Reed Bishop. After her passing in 1884, Pauahi left her vast estate to benefit the Hawaiian people through the founding of Kamehameha Schools.

Alexander Liholiho, grandson of Kamehameha the Great, brought great appreciation for etiquette and ceremony to his court. He and his wife, Emma Rooke, were greatly concerned about the health of their people, and established Queens Hospital on O`ahu.

The grand-niece of Kamehameha I and granddaughter of John Young, his royal advisor, Emma married Kamehameha IV. The couple had one son, Prince Albert, who died at the age

Lot Kamehameha favored a stronger monarchy and placed much of the power back into the hands of royalty. He was the last ruler to bear the name of the great conqueror, and is credited with many public improvements and acquisition of land.

The grandson of a half-brother of Kamehameha the Great, Lunalilo became the first king to be elected. He was well educated and very popular with the people, and became the first Hawaiian to leave his property to charity.

Well educated and able to speak fluent English, Kalakaua — the Merrie Monarch, after whom the Merrie Monarch Festival is named — was considered a gentleman, yet freely mingled among all levels of society. He restored the native hula to prominence and encouraged a revival in island musical tradition.

The granddaughter of Kaumuali`i, the last king of Kaua`i, Kapi`olani married King David Kalakaua in 1863. Her concern for Hawaii’s dying population led her to establish a maternity hospital, now known as Kapi`olani Medical Center for Women & Children.

Sister to King Kalakaua, Lili`uokalani was the beloved last reigning sovereign of Hawai`i. Declared heir apparent in 1877, she ascended the throne in 1891, just two years before the overthrow of the monarchy. She also composed many songs, including “Aloha Oe,” perhaps